Located in the picturesque village of Chalgrave, near Toddington, Bedfordshire, All Saints has remained the focal point of the spiritual and social needs of the community for centuries.

The parish church has seen a great deal of change over its 800 year history. This ancient place of worship was built as a chapel for the lords of Chalgrave Manor, and consecrated in 1222. Over the years it gradually began to be used by villagers from Tebworth and Wingfield during the summer months when access was easy. In the winter months villagers worshipped in a small chapel of ease in Tebworth. We have some glorious mediaeval wall paintings, and lots of interesting features which make All Saints a unique place of Christian worship with a rich history. Following years of neglect some restoration work was undertaken and around 20 years ago the building became available for worship all year round. The Christian community has found its feet again, and our church family is growing both in number and in faith.

The rector is Revd Linda Washington.

There is car parking available ion the church grounds, and there is disabled access.

Your Church is now 795 years old. We know it is difficult for some to attend Sunday service regularly and therefore it can be difficult to give your support. To this end some of our members have set up a standing order to help ensure that our church is there for us when we need it to be there. A living church means much more than a historic building. So if you would like to set up a standing order please find below our bank details:

Church of All Saints is a Grade I listed church in Chalgrave, Bedfordshire England. It became a listed building on 3 February 1967. The church, dedicated to All Saints, is an old structure. Its consecration recorded as taking place in 1219. It features a nave, chancel, and aisles. The large square tower contains three bells. The nave has five bays. Some of the arches are Early English Period, with foliage decorated caps, while other caps are moulded. The register dates from the year 1539. Its fittings include two antique tombs with statues of knights in armour. The interior also features a faded wall painting featuring various saints.

More information on the Church and its history can be found in the publication A Brief Guide to Chalgrave All Saints Church (printed copies available from the Church).

During the 1930s a series of wall paintings dating back to the thirteenth century were re-discovered in Chalgrave Church.  Full restoration work was undertaken in 1932-34 and further restoration work took place in the the 1980s by Bedfordshire County Council.

The oldest of these paintings, to be found at the west end of the aisles – probably dates to the late 13th century. It is thought to depict the Twelve Apostles, with each apostle shown life sized and set beneath a canopy. These figures tend to be overshadowed by a profusion of later heraldic figures. Some of these figures may be in honour of the Loryng family, local lords in the late 14th century. The church contains a 14th century memorial to Sir Nigel Loryng (d. 1386), one of the founding members of the Order of the Garter and hero of the Battle of Sluys.

Further information can be found in the guide by Ampthill & District Archaeological & Local History Society – All Saints Church Chalgrave An Appreciation of its Architecture and Mediaeval Wall Paintings.

Kevin McCloud, television presenter best known for his work on the Channel 4 series Grand Designs, who grew up in Toddington, talks about the campaign to help raise money for the restoration of the medieval All Saints wall paintings. 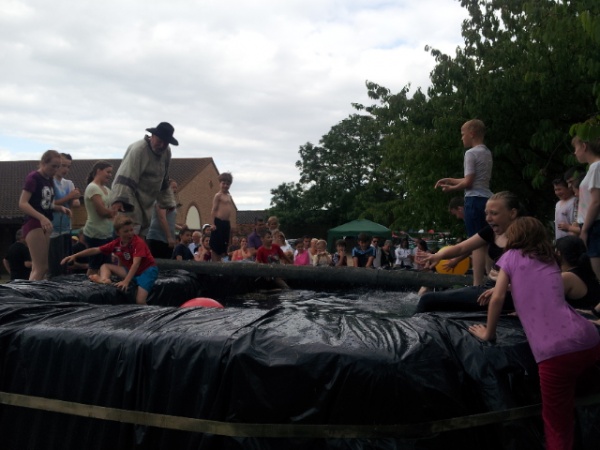